I first encountered Rachel Kneebone's ceramic sculptures as images online somewhere and thought that ceramics was definitely making a come back in the art scene. A few months later, I visited Breese Little, where I had interned last summer, and saw some of her smaller works included in a group exhibition titled CLASSICICITY that assembled ancient and contemporary art together in a really brilliant way. I have always loved the art chosen by Henry and Josie, the directors at Breese Little, and their incorporation of Kneebone's ceramics in this context was spot on (although the show was curated by Ruth Allen and James Cahill). CLASSICICITY was particularly interesting in the context of questioning how we might approach the classics and classicism today particularly with regard to the production of new art. While I really did love many of the works in the show, Kneebone's sculptures have really stayed with me, I think mostly because of their overt materiality. Her ceramics are incredibly intricate and dynamic. Body parts and things that look like body parts sprout from a locus in a way that brings these parts together to establish what really feels like its own unit or body. In addition, the whiteness of the works and their shininess from the glaze is typical of ceramics and designates the objects as such, but also brings in an element of kitsch, which is sort of in contrast with the white and the shapes of the things.

There is an element of excess in her sculptures and an interesting interaction between monument and fatigue. While in one respect, her ceramics appear to be grandiose and reference classical friezes and architecture, they constitute only fractions or fragments of this imagined larger edifice. The small bodies hang almost in a manner reminiscent of Dali's melting objects.

Having started to work at Glasgow Sculpture Studios and having learned about the loss of spaces dedicated to ceramics, Kneebone's works have found their way to me yet again. I'm excited by the inclusion of these kinds of sculptures in a contemporary art gallery such as Breese Little. In such a context, Kneebone's objects are classified and codified differently than if they were to be shown at a craft fair, which of course is a massive problem in the art world. While I acknowledge that often it is the context as well as within the institution that art is defined as such, and while Kneebone is represented by White Cube, I'm still glad to get the chance to see her objects, which I find truly special. 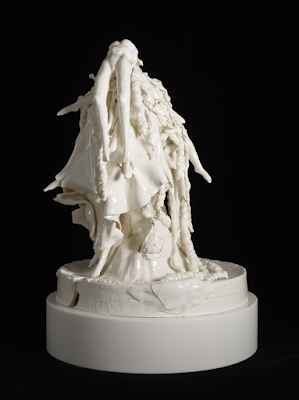 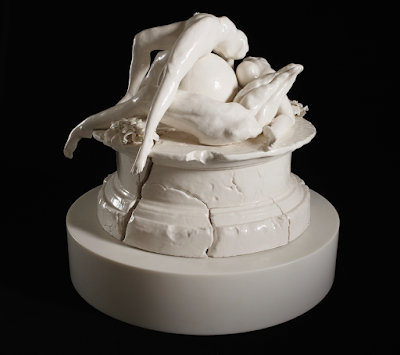 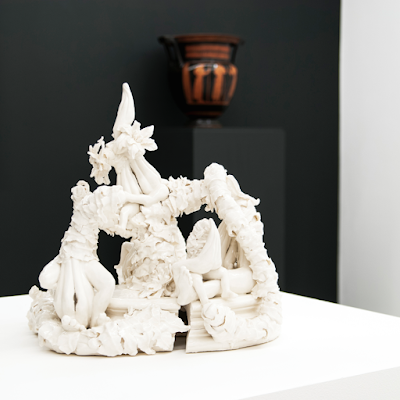 Posted by Jessica Schouela at 20:06