Yesterday I finished the novel Leaving the Atocha Station by Ben Lerner which I thought was fantastic. Lerner tells the story in first person of a young American man who is offered a creative writing fellowship in Madrid for a few months. Adam, the poet, struggles with terrible social anxiety whereby he lies to the people he meets, crying on their shoulders after sharing that his mother is dead and that his father is a fascist. Although both of his parents are psychologists and alive, he nonetheless proceeds to develop theses lies. He goes on to fall in love with two women, Isabel and Teresa in extremely different ways and deals with intense jealousy and the wish to make the women jealous so that he can feel their affection. He relies on these little white pills which tranquillize his anxiety as he uses them to different extents through the story.

In this book, Lerner succeeds in masterfully accessing the complicated emotional life his protagonist who struggles with his American identity, his self-esteem as an accomplished and worthy poet, and his feeling of being both inside and outside the Spanish culture. Adam's character and story is one that I feel I can relate to immensely for variety of reasons, one being the constant wavering of mercurial emotions that constitute my everyday reality.

Additionally, the time I spent in Madrid when I was 19, albeit only 6 weeks compared to Adam's several months, was probably the time I can best pinpoint where I became adult-ish, or at the very least, where I began to come into a self that has stayed with me until now. In Madrid, I fell in love with everyone I met in various ways and was excited to be a part of a community that resonated with me, with people who wanted to talk about the meaning of life, and who sought experience of all kinds. Although I had visited Madrid a few weeks ago to see an exhibition at the Reina Sofia with my MA class, I feel I must return again soon. While it is entirely possible that I am romanticizing my experience in Madrid, and while I know that I went through some painful realizations during my stay, I can't help but remember that summer as being a time of growth and exploration in the best ways. I'm so glad to have read Lerner's novel which, through some kind of comforting, returned me to the ups and downs of dealing with one's own self, one's sense of one's own artfulness and loving others. 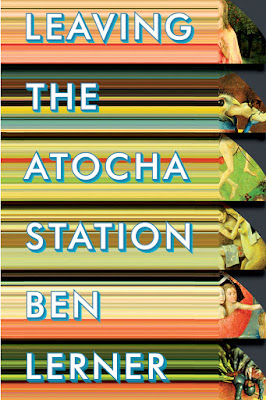 Posted by Jessica Schouela at 14:13