Adventures of the Black Square

Whitechapel Gallery's newest exhibition called Adventures of the Black Square begins with a tiny work by Malevich of indeed a black square. The ground floor consists mainly of works by the historical avant-garde (Malevich, Mondrian) and those directly influenced (Albers). I was happy to see works from the Brazilian Neo-concretist movement by Lygia Pape and Lygia Clark and will be working on Clark's Bichos for an upcoming essay which I am currently researching. I was also delighted to see a work by Eva Hesse included, an artist whom I have a soft spot for. I also stood on a Carl Andre floor piece for the first time; my excited face surely exposed my art history geekiness.

The first floor exhibited more contemporary works that, some more loosely than others, refer back to geometric abstraction. Probably my favourite of these works was David Batchelor's October series.

What struck me particularly however, was how much I loved Sophie Taeuber-Arp's geometric tapestries which I am considering writing my MA dissertation on. Very inspiring! 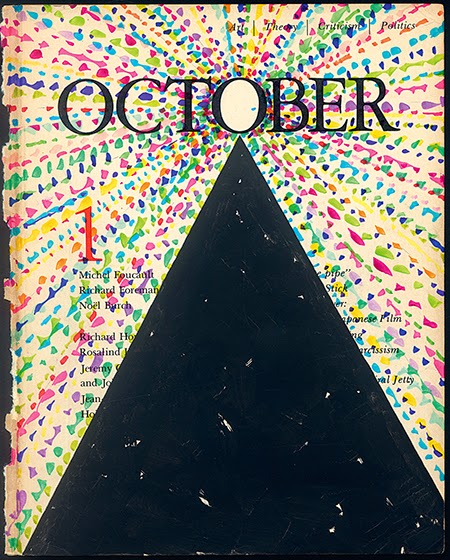 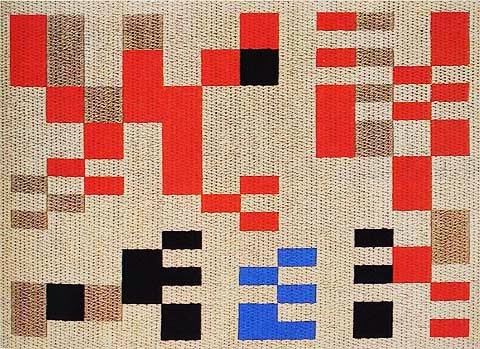 Sophie Taeuber-Arp
http://goandgoo.blogspot.co.uk/2013/01/thursday-sophie-taeuber-arp.html
Posted by Jessica Schouela at 10:50 No comments:

Response to Shlomo Sand's essay "How I Stopped Being a Jew"

I'm about half way through Shlomo Sand's book called "How I Stopped Being a Jew" which so far has given me much to think about and has with surprising accuracy described certain feelings I think I have always felt about coming from a Jewish family. While I am finding the historical accounts fascinating and very informative, what has so far struck me most deeply is Sand's chapter on the ways in which individuals form their various identities. He proposes that the ways in which a Jewish identity has for many secular Jews no longer includes a religious identification whereby one's sense of his or her own Jewishness is in direct conjunction with believing Yahweh, the Jewish God. Rather, he suggests that for many Jews, the definition of a Jewish identity has exceeded an active believing in God. What speaks more true is the sense that many Jews feel a sense of national identity and a sense of belonging to a Jewish nation rather than religion. Moreover, this national identity is more connected to and reflective of the feeling of a communal and shared history amongst Jews, that there is something intrinsic in that which is Jewish.

He goes on to list several Jewish creative thinkers such as Marx, Freud, Einstein, the Dadaist poet Tristan Tzara and filmmaker Stanley Kubrick to name a few. Even before Sand mentions Kafka, I was reminded of a German Literature course I participated in during my first year as an undergrad at McGill. Other than Freud (who had been for some time an important thinker in my life, given my father's intellectual devotion to his oeuvre), I was blown away and deeply moved by Kafka's story "The Judgment" and Paul Celan's poem "Todesfuge". I remember feeling surprised and delighted that in a class on German literature, so many authors that we looked at were Jewish. I remember feeling something close to pride that I was a Jew. In my excitement about my introduction to these brilliant Jews, I felt the budding potential of myself as a thinker that might one day belong to a legacy of what it means to be a Jewish thinker, a Jewish artist. As a response to how good it felt to be a Jew in that moment, I got a tattoo of a star of David on my upper leg. While all my life I have been told that Jews are forbidden to get tattoos and that if a Jew were indeed to get one, that he or she would not be allowed to be buried in a Jewish cemetery, this was not of concern to me. My identity as a Jew was not religious and I felt no commitment to Jewish law or burial customs.

Sand's argument proposes that there was nothing Jewish in works of these thinkers, that Kafka never wrote about even one Jewish character. He claims that Walter Benjamin quickly set aside his interests in Hebrew and Kabbalah for the study of German and greater European culture. I suppose my challenges to Sand's argument would include questions like: would Kafka have needed to produced a Jewish character for his writing to reflect his own experiences, part of which include being a Jew and coming from a religious family? Is Paul Celan's suicide in 1970 completely disparate from having been in a labour camp during WWII and later pursuing themes of the war in his writing?

Perhaps Sand is right to say that there is not a single definition of Jewishness, that, to definite certain qualities as Jewish, is problematic when blanketed onto Jewish thinkers to unite them as participants of a single tradition or national identity. And perhaps my speedy decision to tattoo a star of David on my body in the name of Kafka and all Jewish thinkers was rash and more a reflection of my own desire to figure out my identity/ies, which of course, at age 20, were changing constantly and radically (as they continue to do). Maybe it is idealistic of me to want to hold onto the conception of these thinkers as Jewish thinkers in one way or another.

I suppose my main question to Sand would be: if a person can have multiple identities that work together to form an identifying entity, if I can be all at the same time a woman, Canadian, a writer, then why can't what it means to be Jewish be expanded so that secular Jews can maintain a Jewishness, one that allows for more than one definition? Why is it important to Sand that Kafka not be read as a Jewish writer?

While I accept certain problematics in experiencing one's own Jewishness as a national identity rather than religious identity, this does speak true to my own experience as being a Jew. And while I contend that in dealing with contemporary politics, it is vital that history not abstract the issues at hand, is it impossible that the notion of sharing a history, a language and stories be unifying in a way that is healthy and important to one's sense of belonging? I certainly hope so - on a good day, the world can be so diverse, so rich.
Posted by Jessica Schouela at 16:43 No comments:

Dialogue: The Last Conversation Before the End of the World

Dialogue: The Last Conversation Before the End of the World