Its been four years since
I saw the adult man shriek and weep
over the freshly dead body
of a small dog in the street,
now stained with a trickle of blood.

which comes with a straw
its two usual ice cubes
and I remember.

The waiter brings me a plate of mixed nuts,
crunchy corn and bits of chocolate
and I remember
I only used to eat the corn
so I do that again
despite my temptation for peanuts.

To call the feeling in my chest nostalgia
would be a cheapening
but perhaps accurate description
for the shear delight I took
in my Proustian moment.

I am grateful to the world that not much
has changed at Café Manuela
other than the wait staff.
The chairs are the same,
the white marble tables have remained
(I sit in my usual spot)
the meta paintings of people playing cards
and drinking at Café Manuela still hang
in crammed spaces on the walls.

I think of everyone I have been with
here four summers ago,
as I eat the peanuts,


one by one.
Posted by Jessica Schouela at 12:11 No comments:

Included in the Arsenale portion of Okwui Enwezor's curated exhibition at this year's Venice Biennale was a two screen video installation by Steve McQueen which I think may be the work that stuck most with me during my trip. The video is shown as two back to back screens with overlapping sound. One screen depicts the labouring body of a man intricately preparing a concrete tomb and engraved stone for a another man named Ashes. There is a sense of the body and work that goes into the preparations for burying the dead as well as the craftsmanship and artistry involved to make memorials aesthetic. The sound of this work is particularly striking. We hear the sound of the concrete being spread, chiseling, pealing the plastic stencil to expose the text to be engraved. In this side of the video, while the body of the man working to prepare the dead is present, Ashes's body is absent. Another funeral takes place in the background, emphasizing the work in situ that goes on to prepare a tomb. Death and the labour of burial is cyclical.

The other video, which I viewed second, shows Ashes standing on a boat wearing nothing but a necklace and white swim trunks. He has a young and healthy body and seems to be having fun and playing around. As we hear that voice over of how he was shot several times and consequently died, he falls off the boat but comes back up laughing. In addition to the voice over, you hear the sound of the ocean, but also the sound of the chisel and concrete from the other video, which now seems more aggressive, as if the violence is already being inflicted on his alive and almost polished body. 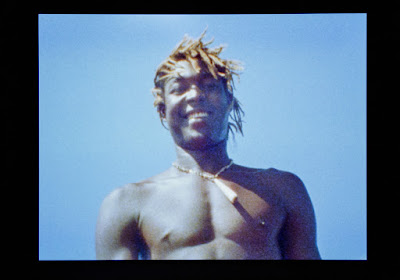 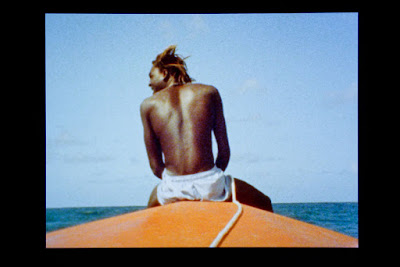 Posted by Jessica Schouela at 11:59 No comments:

Impressions of the Venice Biennale Day 1

This May I attended my first Biennale in Venice (All the World's Futures) as a class trip led by my professor Briony Fer (what a treat!). Other than being completely overwhelming, exhausting and sort of like Epcot in Disney World for art lovers, I thought it was incredible and had the best time. The main exhibition, was curated by Nigerian curator and art critic Enwezor Okwui. The portion of the exhibition located at the Giardini included some great pieces and represented Western artists dealing with postcolonial material more than the portion at the Arsenale, which showed work by many African artists, many of them not too well known. At the Giardini, I really liked Ellen Gallagher's paintings. I had seen her solo show at the Tate Modern a few years back and remembered finding her work really interesting and visually stimulating and engaging.

Another highlight for me was seeing some of Walker Evan's photographs from his series "Let Us Now Praise Famous Men" which I had studied in my course with Stephanie Schwartz on American Media. The photographs were hung on the walls of a room which also showed miniature scale models of architectural structures by Isa Genzken as a part of her project "Realized and Unrealized Outdoor Projects" made throughout the 1980s and 90s. I thought the play with urban/rural, utopia/dystopia made for an interesting dialogue between the works.

Some other highlights included:

Hito Steyerl's installation and video in the German pavilion
http://www.deutscher-pavillon.org/2015/en/ 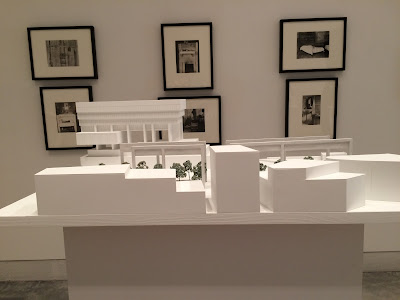 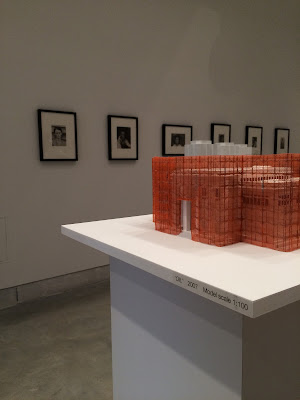 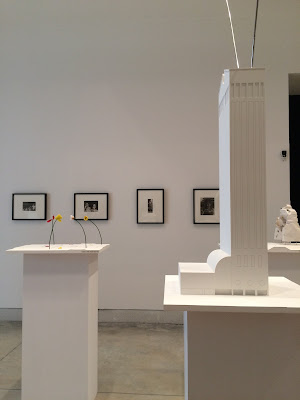 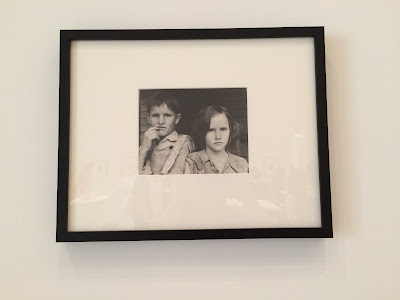 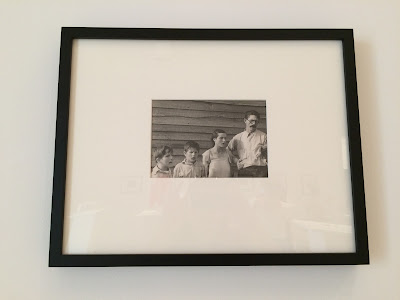 Posted by Jessica Schouela at 11:41 No comments:

"Not Yet" at the Reina Sofia

I wanted to write a short note on having had the wonderful opportunity to listen to curator Jorge Ribalta chat to our class about his recent exhibition "Not Yet" on display now at the Reina Sofia in Madrid. It is the kind of exhibition that requires multiple viewings and ideally with some space in between in order to digest the tightly packed and rich material included in the show. To say that the amount of research that Jorge put into making this exhibition is impressive would be an understatement; the archival material was so interesting and so well selected. The rooms in the exhibition were grouped by country, displaying documentary photography and archival journals and newspapers on specific moments of crises in the 1970s relating to that country's political instabilities. In addition, I very much enjoyed the lecture by Steve Edwards on Modernity and Documentary and on an effort to loosen the dichotomy of these terms that is so often applied to them.

The exhibition gave me a lot to think about with regard to research and curation. But also, I came to really feel that documentary photography and film is where I would like to continue to focus my art historical practice. I hope to be able to adopt a more historical approach rather than focusing primarily on theory. I also realized the importance of archival photographs in the press and greater media in an attempt to produce a thorough analysis of visual culture of a moment in history. It feels like an exciting time to learn all of these things.

Here is a picture I took during Steve Edwards's talk. His Powerpoint slide quotes two important texts by Martha Rosler and Allan Sekula. 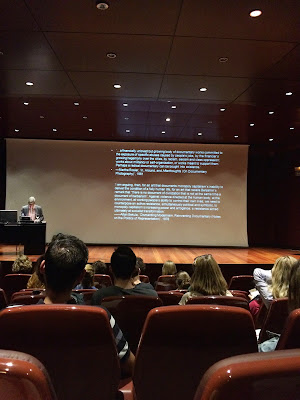 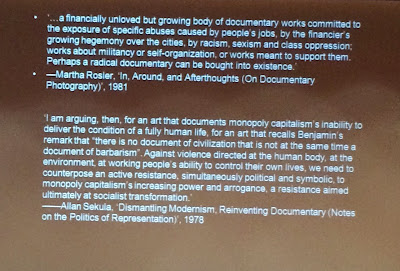 Posted by Jessica Schouela at 21:34 No comments:

- You know when you are the only one who is drunk?
- What do you mean?
- Like, when you just for some reason got much drunker than anyone else and its weird.
- Weird how?
- Like, when you laugh at things the others don’t laugh at or even when they don’t laugh at your genuinely funny jokes? Like, when you want another pint but its Monday night and your friends might be leaving to go home soon? What would they do at home anyway? Why would they need to go so early?
- Dunno. Facebook. Netflix.
- Yeah, I guess. But like, you know those times you just really need to speak to humans in person and not on your computer?
- Like Skyping or in general?
- In general.
- Yeah, I know that feeling.
- Sucks right?
- Yeah.
- Like, those nights you just wanna stumble home later than you should, and you kinda did it on purpose or whatever but everyone is drinking juice or half pints?
- Yeah, I know.
- Like, when all you want to do is to talk about life and sex and self-esteem but everyone is going on about their professional achievements, interviews, their moms.
- Yeah.
- And when you want dogs to come into the pub and go right to you because they feel some kind of special connection with you, that you are somehow a better human that anyone else they can see but they just obey their owners, probably wondering what beer is and what the hype is all about.
- Huh?
- Dogs. Dogs that go to pubs.
- Right.
- The kinds of dogs who don’t exercise too much because the sort of feel the weight of it all. The ones who wait for the leftovers of your tuna lunch because it tastes better than doggy pellets.
- Doggy pellets?
- You wanna go get drunk?
- Ok. When?
- Now.
- Oh, right. Yeah, ok.
Posted by Jessica Schouela at 14:15 No comments: