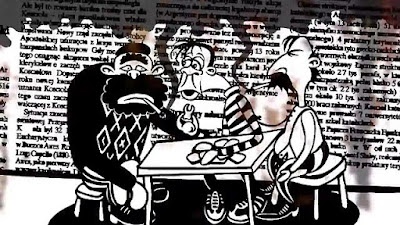 In Tomasz Pawlak’s “Glista Lucka”, upon graduating, a young man departs from his home in the country leaving behind his parents in order to find work in the city. He finds a bunk bed in a shared room with two men playing cards and a bedridden a crippled man with a single tooth residing in his mouth. Putting on his bowtie, he arrives to the office of a potential employer and shows him a series of documents. After getting the thumbs up from the boss, we see the man surrounded by machinery, manning a lever on an assembly line amongst other factory workers whose caps shield their eyes.

Back at the shared room, a large man speaks on the television with a sad expression, as he extends his arm out of the screen to tap the protagonist on the cheek as if to say, there, there. He tosses the worker multiple sausages that land around his neck like a necklace. Similarly, the card players are offered two bottles from the hand of the man on the television who instructs them to vote for him in the election. Without sparing a second, the four men, carrying the older fellow by his limbs, rush to the voting hall and cast their votes. The newly elected politician proceeds to stomp on a pile of citizens, climbing up to the sky and throws a skinny haloed God figure from his cloud, whereby he raises his arms in victory.

Pawlak masterfully makes use of the television in this animation, which is the source of information for the worker and his roommates as they gain access to the wrong doings of the politician. In addition, just as generous arm once extended from the television to offer food and drink, the very same arm sprouts from the screen yanking what was once given. While an attempt is made to board up the television with a wooden plank and four nails, so that the roommates might eat bread without risk of losing it, the endeavor proves futile as the politician, uttering monstrous sounds, eats through the wood and gains access to the room. Using the television as some sort of channel or vehicle to the citizens, the politician embarks on an eating spree, consuming everything in sight, including the immobile man and his bed, beginning with his last remaining tooth.

Pawlak’s animation is not just a cautionary tale on the deceptiveness of politicians. It is also a reflection of the illusions of work, technology and media as being necessarily progressive and fulfilling. It is a comment on the literal and metaphorical consuming quality of greed and the toughness of the lives of those whose socioeconomic rights have been misleadingly given to them only to be taken away.

Posted by Jessica Schouela at 13:50