Perceiving the worlds of de Chirico 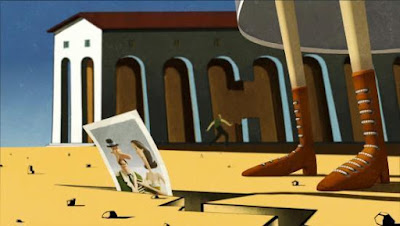 Perceiving the worlds of de Chirico

The animation titled “Lost Senses” by Marcin Wasilewski tells the tragic story of a man and a woman who ride or surf on pieces of concrete through the clouds to arrive at a city on a floating island. The film pays homage to the style of Italian Metaphysical painter Giorgio de Chirico, who greatly influenced the Surrealists. The woman, who holds a photograph of her and the man, reaches the island first. As the man, tightly gripping one red rose follows a few seconds later, he sees her at a distance. The wind takes hold of her photograph and she runs after it behind a building and out of sight. The man, determined to reach his beloved, begins to run towards her but as he does this, buildings begin to sprout from the ground like magic trees.

Although he had been somewhat clumsy on his concrete surfboard, nearly free falling off into layers of sky, his motivation seems to have provided him with superhero or parkour skills to climb buildings and soar from one to the other, karate kicking and chopping in mid-air. Running too quickly, he becomes distracted by a de Chirico style headless nude marble statue, revealing a single breast. The man runs into a stone block and his head crumbles like porcelain, breaking into pieces that separately house his eyes, nose, etc. By the time he and the woman cross paths at the end of the film, she too is without a head, resulting in each character going unnoticed to the other.

Wasilewski’s animation brilliantly appropriates de Chirico’s painted architectures for his mise-en-scènes. Each shot looks like it could have been extracted from one of the painter’s works, as Wasilewski frames the characters and objects as well as their shadows so that they communicate in a composition recognizable of de Chirico.

In addition, Wasilewski’s characters, despite their bodily configurations or materials, are entirely human and relatable. They are at once awkward and uncoordinated, decisive and resolute, fogged and frenzied. “Lost Senses” is a fantastically visually narrated tale of two individuals getting lost in their attempts to find one another. Not only does the film capture what it feels like to really look at a de Chirico painting, as if to lose one’s footing within his painted worlds, but it is also an honest description of how we all get lost everyday in our real lives.

Posted by Jessica Schouela at 14:02 No comments: 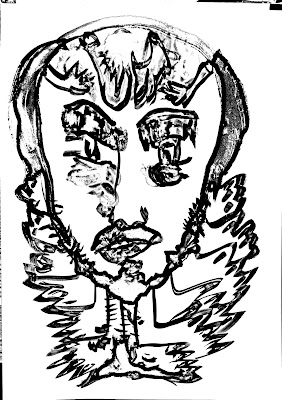 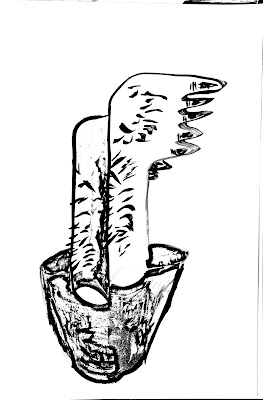 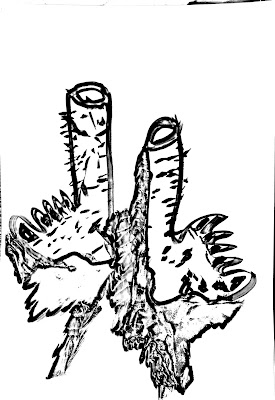 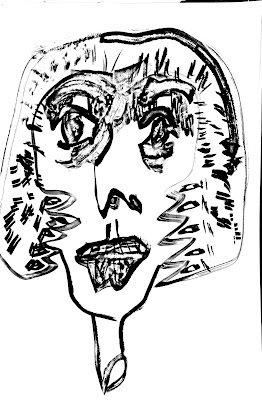 Posted by Jessica Schouela at 13:00 No comments:

One of my poems was published today in Issue 7 of Really System. It is one of my poems that is most dear to me and is about my experience at my grandfather's funeral. 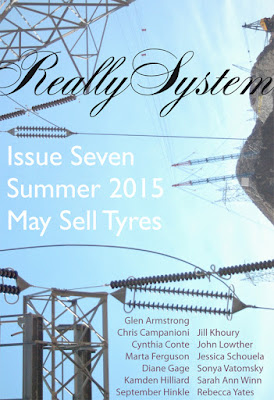 Posted by Jessica Schouela at 13:34 No comments:

Some faces and limbs 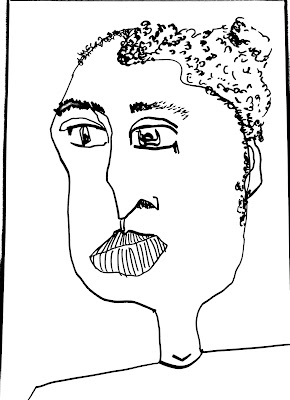 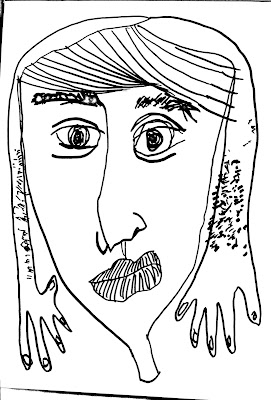 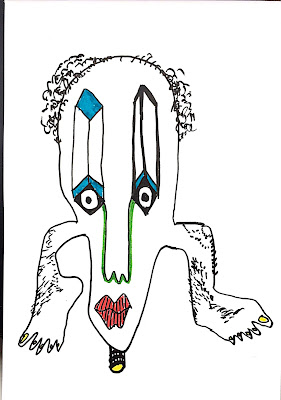 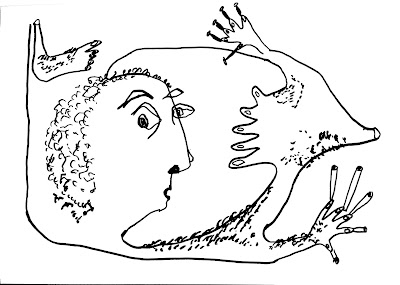 Posted by Jessica Schouela at 13:53 No comments: 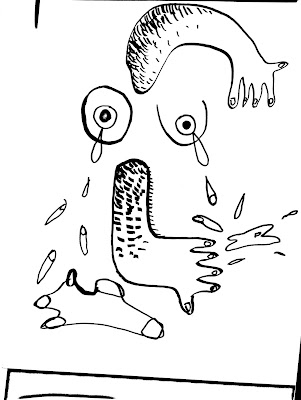 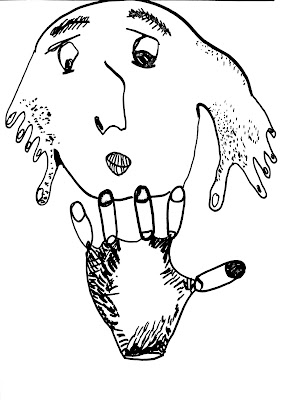 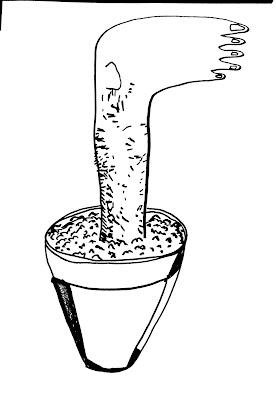 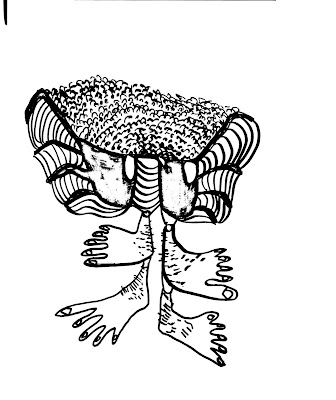 Posted by Jessica Schouela at 17:40 No comments:

A Chick with a Trick

A Chick with a Trick

Michał Socha’s (b. 1981, Warsaw) 2008 computer animation Chick (Laska), is a stunningly executed story of two cycloptic characters: a femme fatale who prepares herself to receive a male visitor in bed. After an evening of romantic activities, wine and dancing culminating in sex between the two, the man leaves with a new “point of view”, or lack thereof…

Socha uses only black, white and red and brilliantly assembles objects and body parts that emerge and recede through his use of the different hues to communicate shadows, light and silhouettes. There are also some wonderfully abject moments: the female figure takes a blade and shaves off her armpit and leg hair and later uses a long hair on her head as a straw which she places directly in the wine bottle, finishing every last drop. Her breasts bounce up and down as she runs towards her set of shelves to trap them in a bra, only to release them when she takes the male character to bed, who consequently during the sexual act, is shown jumping from one breast-shaped mountain to the next causing milk to squirt straight out from the nipple.

Their lovemaking is depicted more or less abstractly and metaphorically through a montage of grinding gears, erecting shapes, a martini glass that becomes a female pubis, and their bouncing individual eyes that lead to a fireworks-like explosion. The male leaves clutching the walls, having lost something now occupied by the female, who remains lying in her bed.

The five minute film was the winner of several awards including Annecy IAFF, Ottawa IAFF, 49 Krakow Film Festival, BuSho, Animania, Art Directors Club of Europe, amongst others. Socha was educated at the Academy of Fine Arts in Warsaw and continues to work on animated short films both artistically and commercially.

This review is originally published on the Play Poland Film Festival website as a part of an animation mini-series I am working on called Watch It Again. http://playpoland.org.uk/index.php5?name=newsy&oId=598


CHICK from Mayki on Vimeo.
Posted by Jessica Schouela at 15:37 No comments:

Two days ago I went to see Ana Lily Amirpour's Iranian vampire film called "A Girl Walks Home Alone at Night". It takes place in Bad City, where a young and beautiful woman, who also a vampire, stalks and kills a number of male characters. Although there seems to be some kind of social justice in her choices of which men to go after (drug dealers and addicts), she does at one point kill an innocent homeless man. In addition, there is some kind of self-awareness on her part about her actions and how they fit into human conceptions of ethics and moral behaviour as she vocalizes to Arash, a young man that she meets in the street (ironically after he leaves a dress up party disguised as Dracula) that she feels she has done bad things.

What I thought was most brilliant about the film was its use of sound, but mostly the circulation of props and the ways in which commercial and monetary goods are passed around between characters: the fancy car that Arash worked for over 2000 days to afford, the jewels and watches of the drug dealer, Arash's cat, the little boy's skateboard. There is an overt presence of money as it is exchanged for drugs and services (like sex) as well as stolen goods that are transferred from one character to another. While the film could be called somewhat feminist, whereby a charming and sweet yet dangerous and demonic creature holds the power to decide on the fate of people's lives, there is also a palpable critique of capitalism and the dangers of what money can buy and the ways in which money transforms individuals to act in a certain way.

The film is beautifully made and there are several tender moments between Arash and the vampire girl. One of my favourites was when they are listening to music in her bedroom and Arash is dressed as Dracula. They are close to one another as the disco ball spins and causes flashes or circulating light throughout the room. 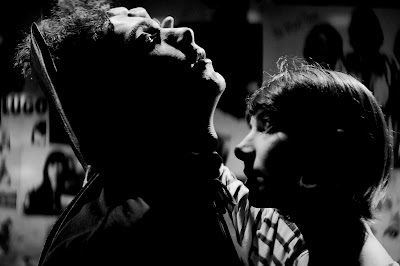 Posted by Jessica Schouela at 22:07 No comments: