Some thoughts on activism

I've been thinking a lot lately about activism and the different ways in which people engage with the world in order to mobilise change. I've been asking the question: what counts as activism? Is it attending protests, signing petitions? What else? What is the most impactful political act a person can do? Or, is the simultaneous acts of different methods and pursuits (some more direct than others, some depending on the number of bodies that show up, others on changing legislation) complimentary in fighting for social equality?

This has come to my attention in the work I do at Teach First and my colleagues' stories of why they chose this career and their journeys. A colleague shared with the Teach First Women's Network the concept that women are more likely to "live in the margins of their own lives", which she told us is a Jewish concept stemming from writing in the margins of sacred texts and living by those notes or morals. What she meant by this is that women often live through the lives of others, often taking care of others and the next generation. While this can be a strength, it is also necessary to turn inward and live deliberately as the main narrative in one's life. This same colleague started a free school upon hearing the news that the school in her local town would be shutting down.

I have also been thinking about actively engaging in societal changes and activism through the books I have been reading lately. 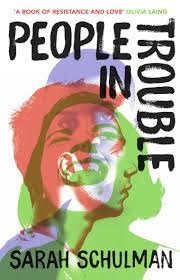 Sarah Schulman's novel, People in Touble, originally published in 1990, is a response to the devastating AIDS crisis New York City, the experience of a community watching huge numbers of their friends and lovers die, and their fight in the face of being ignored by the government's action because of their homosexuality, and thus, marginalised status in society. An excerpt: 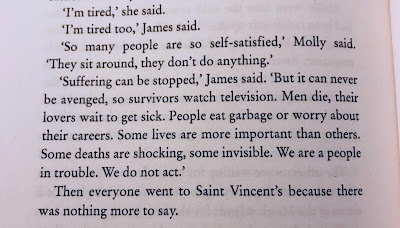 I have just started the book Human Acts by Han Kang about the Gwangju Uprising in South Korea in 1980. A question she repeatedly asks has to do with differentiating between a living body and a corpse, and that intangible moment in between when one becomes the other. When describing the heaps of dead bodies that need to be navigated, moved and identified, she also talks about the spirit or soul and wonders if it lingers beside its former home, looking down at its body alongside the bereaved. A boy contends with his shame for running away upon becoming aware of an active shooting, as his friend is shot dead by the military. 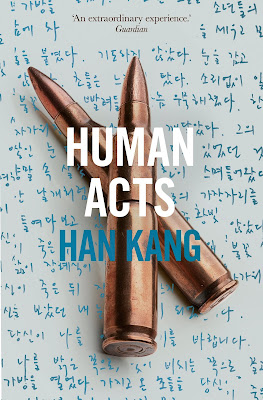 While the boy's instance was an adrenaline response to survive, I'm curious about questions of complacency and the ways in which no action ultimately reinforces and supports oppressors and anti-democratic or brutal regimes. To what extent are we prepared to do nothing to preserve our own safety and comfort? And to what extent must we sacrifice our own safety and comfort to ensure that everyone be permitted this same stability.
Posted by Jessica Schouela at 19:06