Lincoln in the Bardo

George Saunders's magical realist, historical novel, Lincoln in the Bardo, drives its plot by way of anecdotal snippets at times taken from documentary texts describing personal observations of the President at the time of the death of his young son Willie, and at times from his fictional congregation of ghosts who find themselves trapped in a purgatory crypt. In this bardo space, which acts as an existential and literal space between life and death, the ghosts, among which is the little Willie Lincoln, feel haunted by their own "sick-box" (coffin) and seem unaware or in denial about their death status, finding small bits of hope that they might return to their old lives and loved ones rather than acknowledge or seek the next stage in their journey in the afterlife. 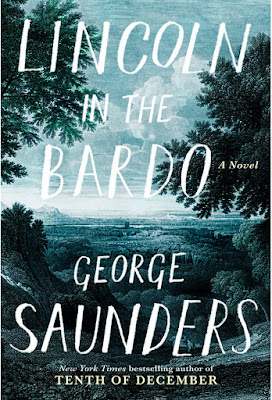 The style of narration is highly experimental, so that there is no single protagonist but several key narrators who provide short descriptions of actions, events or personal histories. These fragments are shared with the reader by way of a collaborative storytelling on behalf of the ghosts or through the documentary quotes sutured together by Saunders to give a multi-perspective, often contradictory assessment of Lincoln's mourning process, a party he hosted just before Willie's death, and Lincoln's treatment of the ongoing Civil War. In fact, Lincoln features very little in the book and is not (directly) one of the speakers. His thoughts are only revealed when one of the ghosts "steps inside" his body, inhabiting it in some sort of way — in one instance, grown men occupy Lincoln's body so that they are nearly held by him, as if they themselves were Willie seeking comfort from his father —at which point they are able to access Lincoln's thoughts pertaining to his grief.

Interestingly, the contradictory narratives are most striking in the documentary text, where critics and writers from the time don't seem to reach many consensuses on real events and it becomes difficult for the reader to extract truth. In one moment, Saunders has collected descriptions of the moon by guests attending party at the White House, where it is reported to have been big, small, full, crescent, bright, non-existent, high, close, blue, green, yellow, yellow-red. These moments are reminiscent for me of a moment in Max Porter's novel Lanny, where village members gossip about their speculations regarding Lanny's disappearance, each with their own self-convinced theory. 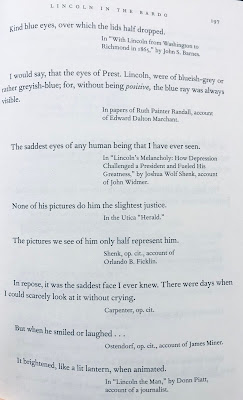 In this respect, the ghosts seem to be more on the same page than the living, progressing the plot not only by describing their experience, but by working with the information previously given by their companions, disclosing their unique perspective. As such, just as they inhabit Lincoln and reveal his innermost thoughts, so too does the reader inhabit each of these departed characters, becoming familiar with a voice before its source is revealed in smaller font at the end of that particular contribution.

For these reasons, Lincoln in the Bardo is formally experimental, pushing the limits of the novel and combining fact and fiction to fashion a combined, (mostly) coherent narrative albeit at times with varying takes on even the slightest detail. It is, in this way, a tribute to the subjectivity of experience and truth, and the ways in which we each live and absorb the world within our very own magical realist minds, determined so subjectively by our distinct and personal perception and experience.

Posted by Jessica Schouela at 04:01