I’ve just watched “Porco Rosso”, my first Hayao Miyazaki film, which I thought was fantastic. While admittedly, I’m very new to anime and have little to compare it to, I found “Porco Rosso” to be both sophisticated and hilarious. The film tells the story of a pilot in the Adriatic Sea, who, because of a mysterious curse, has the head of a pig.

I was surprised when I watched certain scenes with quite explicit feminist messages. When Porco goes to his usual mechanic in Milan, Fio, the granddaughter of the garage owner, presents herself as the engineer who will lead on the construction of the pilot’s new plane. Shocked that she is both seventeen and a woman, Porco reacts with shock and rejects her, asserting that this is not something he can get on board with. While she admits that she is young, she claims she can’t do anything about being a woman. The next morning, Porco finds Fio having stayed up all night, finishing up the design for his new seaplane. Impressed by the blueprints, he gives her the job. Later, when the all-female building crew arrives, each introduced as a family member of Fio’s, Porco takes his new situation with a grain of salt and develops cute rapports with many of them, especially the delightful grandmothers.

The brilliant narrative was made even more magical through Miyazaki’s skilled animation techniques, which tell Porco’s story in a way that is at once direct and sentimental. Being rather a lone wolf, for lack of better words, who worries primarily about himself and getting paid as a bounty hunter, Porco learns the lesson of honour in an unusual way. Encouraged by Fio to fight for his honour against an American pilot who had once shot his plane down, he seems to go into the final air fight more to protect Fio than to establish himself as a hero. While it is true that she, along with Porco’s debt for the airplane repairs, becomes the bet for the fight, she puts herself in this situation based on her faith in Porco, but also, and perhaps more importantly, on her own mastery as an engineer. 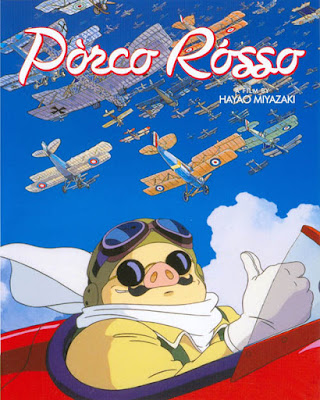 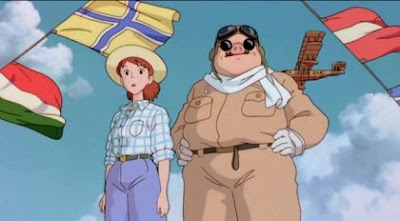 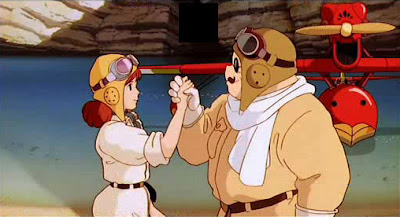 Posted by Jessica Schouela at 21:52