A Conversation between Jessica Schouela and David Haslam

JS: As a part of your artist residency at the Talbot Rice Gallery (TRG3) in Edinburgh, you presented some of your research at the Luc Tuyman exhibition opening on October 30.

It seemed that you had paired the numbers that were stuck throughout the two rooms on the upper floor of the gallery with your voice coming from a set of headphones that appeared to be cataloguing the architectural details around the viewer. Can you tell me a little bit about your process?

DH: The process, for the project, has been to take the rooms I have been provided with and use them as the subject of my work, or at least as something to start with and test works upon. This is in keeping with my practice in general – almost all of my work is responsive to something, whether that be a site, an object, photograph or a format. For example, if I made a work for a book, it would be about book structure.

Regarding what’s set up in the gallery at the moment, I’m not interested in making site-specific works. Here I’m developing work about our perception of something, and that happens to be the room in this case, therefore I’d intend it to be transferable, to another site/space potentially, although each site might bring slight changes to the work, it’s about making a process or project and the room is the ‘case study’ example it has been demonstrated upon – however, the ‘work’ is developing from this room, I didn’t come in with this idea, it has developed here on this residency, but I like that a work could be taken somewhere, so each time it gives an experience that is specific to that place, but it is re-applyable.

The numbers themselves – everything in the room was identified and then that list was alphabetized; the order of the numbers reflects that ordering of the components of the room, although there is some order. For example there are many items, which share the same name, like a skirting board, and they don’t share the same number. I used an audio of the list being read because I didn’t want to present the index as a list on the wall, it would be too functional, the audio subjects someone to the information, in that it’s given to you in a set order and pace, one thing at a time. I suppose that’s where the ‘work’ may lie, if you’re listening to the audio and looking around the room, the order of the two don’t match up; where things are physically in the room is reflected in the list.

You mentioned the word ‘cataloguing’ as well. It is cataloguing, but that’s not what I want it to be, I think. I’d rather it became some sort of equivalent to the room, but I made the list so it’s not a certified scientific process by any means. Maybe if it was presented on its own, it could become an abstract version of the room. Something for me to think about…

JS: How do you expect this project to develop? And, how do you see yourself working within the larger history of conceptual art practices?

DH: In terms of expectation, my only expectation is of myself and that I continue to produce work in the time that I have. I have no planned direction for the work to go in as it were, that’s development, but, in terms of format, I would like to have some sort of resolved ‘artwork’ set up by the end, a manifestation of the research I suppose.

Good question about Conceptual Art, though I’m afraid I’d only give an ignorant answer. I don’t even know what Conceptual Art is today, for what I think it is anyway but I am definitely influenced by it and find an affinity with what some of the artists associated with that term do/did and how they do/did that. That’s all I’d dare say: I’m influenced by it.

JS: Your notebooks seem to be an important tool for you in your research. How do you see them as contributing to your practice? They are put together meticulously and aesthetically. Do you consider them as art objects in and of themselves or as important parts of your display? In this regard, how do you view the pictures you take and assemble? What role, if any, does photography and collage have in your work?

DH: Yes they are, and I do consider some of the content within those books as artworks in their own right. Firstly, the notebooks are a working tool for myself, so that I have a record of every idea or material act that I have done. And, again for my own reference, if I have an idea I try to make a visual manifestation of it, a drawing, a collage, photograph with a caption, so they are created along the way. Yes, I do take the time to present them in the way I do and I like to have a 2D equivalent of ideas that could be 3-dimensional. Also, sometimes you can communicate something better with a collage for example than you perhaps could with a substantial artwork. So they are an expansion of my artistic outputs. I tend to always make a large pool of material that collectively represent or speak a theme, idea, interest, etc.

Collage offers the opportunity to create new things, putting things together to create new meaning – so some collages are documentation, e.g., putting a map next to a photograph with a material fragment taped next to it, going back to conceptual art here, others are actual works. They might contain documentation, like a photograph, but they are presented to give meaning, not communicate something in existence.

I’m starting to upload pages from my books onto the TRG3 website, so I’m using that as a platform to expand my display for the residency beyond the room itself, but it is also documentation of my time there. There isn’t always the opportunity to display that side of my work, but it always goes on.

JS: What are your hopes for the remaining weeks of your residency?

DH: To continue developing the project, even I don’t know where it will lead, and I don’t see the end of my time there as the strict end of this body of work, especially if there appears to be more mileage in it. But it’s a privilege to have a space like that to make and display work, especially with the kind of support I am receiving from the gallery. So I’m just trying to make the most of it. 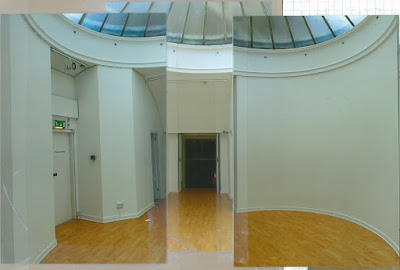 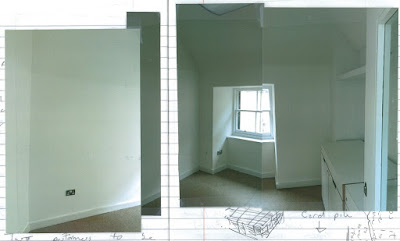 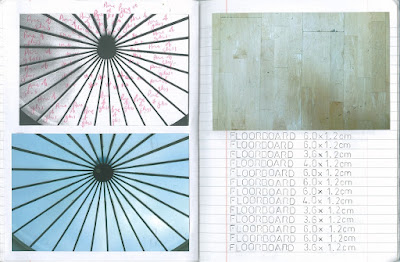 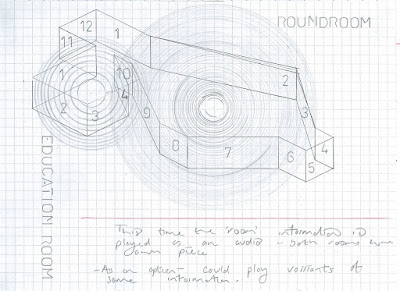 Posted by Jessica Schouela at 22:22