Sartre's preface to Fanon's The Wretched of the Earth

- “ ‘you are making us into monstrosities; your humanism claims we are at one with the rest of humanity but your racist methods set us apart’”

- “you warned them that if they shed to much blood you would disown them, or say you did, in something of the same way as any state maintains abroad a mob of agitators, agents provocateurs, and spies who it disowns when caught. You, who are so liberal and so humane, who have such an exaggerated adoration of culture that it verges on affectation, you pretend to forget that you own colonies and that in them men are massacred in your name”

- “yes, terrified; at this fresh stage, colonial aggression turns inward in a current of terror among the natives. By this I do not only mean the fear that they experienced when faced with our inexhaustible means of repression but also that which their own fury produces in them. They are cornered between our guns pointed at them and those terrifying compulsions, those desires for murder which spring from the depth of their spirits and which they do not always recognize; for at first it is not their violence, it is ours, which turns back on itself and rends them; and the first action of these oppressed creatures is to bury deep down that hidden anger which their and our moralities condemn and which is however only the last refuge of their humanity” 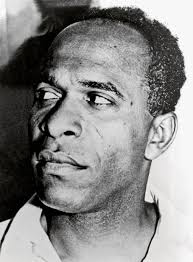 Posted by Jessica Schouela at 14:16