"What is interesting in her conceptual and political operation is the total absence of a need to fight patriarchy with its own weapons: men must just be “abandoned to themselves,” which in no way means that they should be avoided or treated like enemies. Abandoning men to themselves comes down to refusing to play into the mythology of a complementarity constructed entirely at the expense of women. It means rejecting a sexuality that is nothing but a form of colonization"

"She said she wanted to finally get rid of the residue that the passage through the masculine world had left on her. She wanted to give up theoretical writing. The ease with which she abandoned her theoretical privilege is puzzling when we measure the importance of her writing, but somehow it is totally coherent: she could only find power in her lack of attachment to writing as a cultural, intellectual practice. In fact, her skepticism towards culture is the very source of her theoretical strength"

What does it mean to not participate?

"In “La donna clitoridea e la donna vaginale” (The clitoridian woman and the vaginal woman), Lonzi demolishes psychoanalytic fallacies regarding women’s pleasure. She reveals how an autonomous feminine sexuality, one that dissociates the sex act from reproduction—even within heterosexual relationships—can be the starting point for a different type of subjectivization for women. For Lonzi, being a clitoridian woman has not only sexual connotations, but existential and political connotations as well"

"In her diagnosis of the situation, it is tempting to compare Lonzi’s position to the position of the artist confronted by the professional apparatus: women, she explains, haven’t rebelled against the myth of society because even in their private lives they are still crushed, unrealized, oppressed. They cannot even reach the doorstep of life with sufficient stability, because they start with a handicap. They look for love and a relationship with a male partner, but this relationship will only take place in a way that reinforces the partner, helps him to face the world from a stronger position. A woman’s need for love was probably created by patriarchy to help men succeed in life. Women give love an independent value, while men give it an instrumental one" 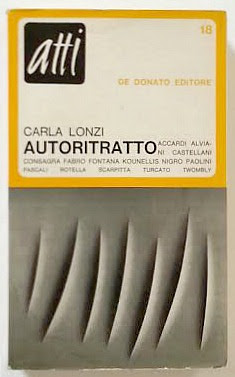 Posted by Jessica Schouela at 20:03