Here is a section of my talk on feminism from today at York Art Gallery in conjunction with the exhibition Flesh.

There is an effort on behalf of these three artsists to reframe here what we think of when we consider erotic art. With Saville, the female bodies she presents are far from classical beauty and in fact, present an alternative that is typically scorned within society and deemed unhealthy. By way of this declaration relating to health, it becomes difficult to connect what we consider healthy sexuality with bodies that are prosecuted as not belonging visually to the category of health, yet Saville forces us to think of these bodies as necessarily just as sexual as the next. Her work proposes the difficult question around alternative bodies and flesh and if the sexualization of bodies considered outside the norm becomes inclusive or by its very nature of difference, promotes a fetishistic gaze.

Kneebone’s sculpture functions similarly, though perhaps more subtly. Although she appropriates the smooth white bodies of classical sculpture, her figures are fractured or fragmented into limbs, most prominently into dangling legs. As such, this work suggests the visual severing of women’s bodies that ease the perceptual transformation of women from subjects into objects, into parts and pieces that serve a patriarchal sexual desire. By invoking the classical figure, this work suggests that this cultural and social concern is not new. Rather, even within the history of art, people have wanted women’s bodies to look a certain way and to respond to a certain yearning, one that is subject to gender, race and class.

In Jen Davis’s self-portrait, she presents herself horizontally, lying on her back on a bed. Her legs are raised, which suggests perhaps a sexual position. Because of the horizontal angle of her body, we read the folds in her flesh as a kind of landscape, which is particularly emphasized through the frame that she uses, which ultimately fragments her body, decapitating her and removing her feet so that recognizable human forms and symbols are not included. This horizontal position is not only sexual, but also calls into question the assumptions that a body like Davis’s is lethargic and static as opposed to a vertical, athletic body. Yet, Davis does not let the viewer feel comfortable in the abstraction of the represented body. We soon discover this is the self-representation of the artist’s own body, which immediately does not permit a ‘safe’ abstraction of the naked figure, but rather makes it personal, gives it a name: Jen. As such, we become aware that we have been invited into the private world of the artist and into her bed as she forces us to really see her in her most exposed, most honest and most vulnerable state as a body that is at once alternative, sexual and creative.

Other self-portraits by Davis also feature the intimacy of her body and nakedness and depitc images of herself coming out of the shower, looking at herself in the mirror with tights on that contain her flesh, and her in bed with men, whom she has explained have not been boyfriends, but actors in fabricated narratives. Since taking this image in 2007, Davis has lost 45 kilos. Her weight loss was inspired by looking at her own images of herself and coming to terms head on with her insecurities and limitations. As such, we are reminded of Jo Spence and her process of photo-therapy and the ways in which engaging in photography and self-portraiture holds the potential for self-healing in a manner both physical and emotional. 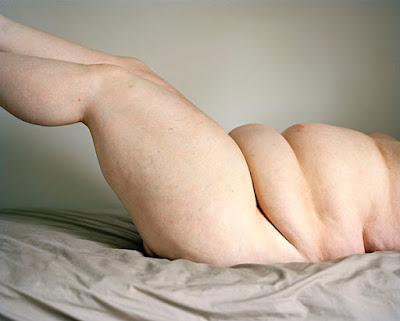 Posted by Jessica Schouela at 11:46