Read the review I wrote called 'The stone as life and author' on Stuart Whipps's exhibition Isle of Slingers at Bristol's Spike Island. Originally published in Art plus Thought. 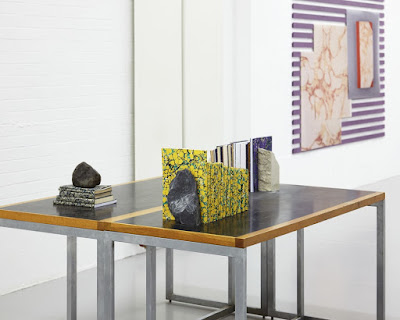 British artist Stuart Whipps’s multi-media exhibition, Isle of Slingers at Spike Island reflects a project that brings together, by way of colour coding, three individuals, assigning to each a distinct stone: Edward James, an arts patron primarily of Surrealist work is paired with Portland Stone, designated by the colour purple; architect Sir Clough William-Ellis with slate represented by yellow; and artist John Latham with shale and the colour grey. These united elements are reflected in one instance through landscape photographs of where the stones originated from, attending to questions of labour and class by way of the working of raw materials, (the Portland stone from Pulpits Rock, the slate from Blanenau Ffestiniog, and the shale from the West Lothian)[1]. These gorgeous landscapes undeniably bring to mind the sublime, yet they are not without the allusion to human presence.

On a table, the stones themselves are present. They behave as bookends or a paperweight, which hold still a series of books of various sizes. Separated by their colour, the books are all wrapped in marbled covers reminiscent not only of artisan paper-making techniques but of course, primarily of stone itself. These sculptural assemblages refer to matter and are the actual presence of matter in the gallery space and also recall Latham’s iconic method of using books in his own sculptural work.

Another dimension of this series of representations are the reliefs hung on the walls, again colour-coded. They each comprise of coloured horizontal shafts, composed in such a way that they create different shapes on the wall. Photographs are stuck on them and depict different elements related to the exhibit: stones, details of marbled paper and of a marbled book, a piece of slate and an architectural arch. With each new series of representation, the stones themselves are abstracted anew. If the landscape photographs are designed to contextualize the stones, their use and presentation as objects with a function (stabilizing the books) abstracts them from their status as a natural resource, transforming them into tools for servicing human needs. Moreover, the stones are hinted at in the reliefs, yet some do not even picture them at all, rather only refer to them and to their corresponding human matches with an intentional distance.

The exhibition includes a video of a man beside a projection of a photographed stone onto a textured wall. The image is muddled and often unidentifiable as a result of the three-dimensionality of the wall, until the man places pieces of smooth stone on a table, carefully curated so that each are a different shape and size, in front of the projection so that the image becomes increasingly clear with every placed stone. Once the image is sharply projected onto the stone, the performing man, William Bracewell, proceeds to position his body as a mirroring response to the photographed and subsequently projected stone. There are several mediations at play: not only is the image of a stone projected onto an actual stone, but Bracewell adopts the position of the stone so that the stone is anthropomorphized. More interestingly perhaps, is that in turn, Bracewell’s body, by way of his choreographed meditation becomes the stone.

Whipps’s work in this show is an acute reflection on the artistic mediation of materials in a variety of forms that play with dualisms such as 2D/3D, material/immaterial, nature/culture, human/nonhuman. He responds to the stones’s distinctive agencies not only to represent three men, but also to be represented by him and to be performed and laboured by Bracewell in such a way that it becomes unclear who the true director of these artworks is. Is Whipps encouraging a shared authorship between himself and the stones? Whipps here asks important questions about representation and the distance that occurs when materials become artworks or practical objects and invites us to consider the labour of turning raw matter into instruments as well as the ways in which raw matter are themselves labourers tasked at the will of humans.

We might thusly be encouraged to ask the following questions: Who is the owner of these stones? Are they there for humans? Why is it important to be aware of where matter comes from? What are the possibilities for non-human or non-living subjectivity and who allocates this agency or authorship?

Isle of Slingers is showing at Spike Island in Bristol until 18 September 2016.