Really interesting novel by Montreal born, now Scotland-based author and academic Sarah Bernstein. Featuring a young woman academic, the prose reads very academically, which was interesting to read in the form of a novel. I could certainly understand how this book, whose unnamed protagonist is distant, vulnerable and hateful (mostly to men, but often finding many people or social situations abhorrent) would not be for everyone and that the elaborate syntax and unusual vocabulary could deter some readers (and at times myself), and impede following the story or the shifts in the narrator's thinking. In some passages, this elaborate prose reads as a 10/10 and exquisitely captures complex and layered emotional experiences.
There are clear moments reminiscent of Rachel Cusk's trilogy where fleeting characters seem to open up to the protagonist without much introduction, and share extremely personal and conflicting feelings, memories or current situations. While I enjoyed these asides, which did work to reveal a new angle of the narrator, it felt improbable that she would be approached by strangers in this way. She is presented as quite the opposite of an emotionally available, stable and compassionate bystander and in fact, there is something dangerous about her, as if something might snap at any moment. While this may have attracted certain confessions, the more wholesome ones seemed less likely to choose her as a place of safe release.
I found the descriptions of academic life compelling and relatable, especially the seeming intimacy and familiarity one may feel with one's colleagues alongside with the constant and ultimate whisper of opposition, rivalry and threat just below the surface of playacting prescribed and unquestioned roles at academic rituals, such as a weekly guest lecture. 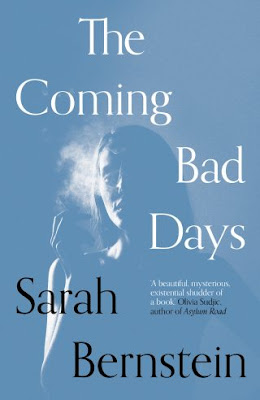 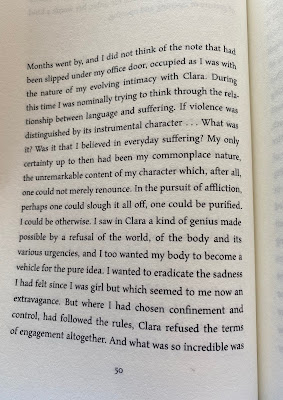 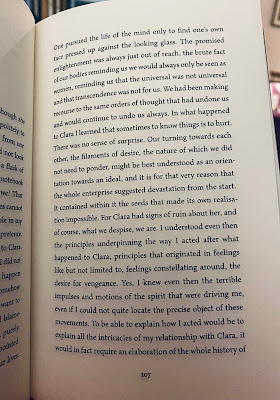 Posted by Jessica Schouela at 09:41