In the LRB discussion, I was particularly intrigued by Tom McCarthy's link to Aeschylus’s Oresteia which he has articulated in an article in the Guardian called Does Theresa May really know what citizenship means? 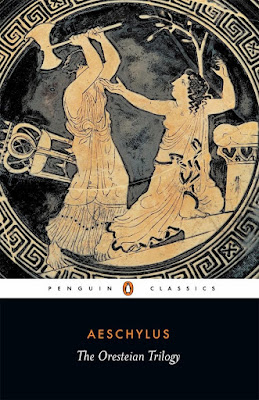 While the talk and article are 3 years old and centred around the immediate responses to Brexit, I found them to be still of considerable value. McCarthy discusses the Oresteia as reflecting he choice of democracy over tyranny and learning to listen to the dialogues of those we disagree with: Athena defers the opportunity of making a unilateral decision by calling upon the 12 wisest citizens to debate the issue at hand and reach a consensus. The point ultimately is that democracy is a structure that allows debate and enables voices and disagreement and that it has the capacity to endure and contain disagreement in the form of dialogue.

The presence of such a structure that exists within a polis (city), is what allows difference to co-exist. To advocate for democracy then is to consent to and approve of a nation that encourages the presence of difference and different views expressed through dialogue. For it is the bearability of disagreement and the survival despite it that enables the existence and maintenance of a democratic nation.

McCarthy writes: "one is a citizen not simply because of an internal relation to one’s community, although that’s part of the picture, but because of a relation to a complex, often troubled outside; through the acceptance of the outsider into your place and yourself into theirs... It turns out that May is not just wrong; she’s exactly wrong. If you’re not a citizen of the world you’re not a citizen of anywhere. You’re not even a citizen; you’re just a subject."
Posted by Jessica Schouela at 19:33