I have just finished reading Mexican author, Guadalupe Nettel's novel, Still Born, after having heard her speak at a book event at Standford's this week in Bristol. This book blew me away and brought together so many themes I have been thinking about lately, while also expanding on them in ways I hadn't considered: ambiguous motherhood, motherhood and choice, freedom/independence vs motherhood as consuming/oppressive, violence against women and femicide, and the kinds of communities and sisterhood that sprout from collective trauma. 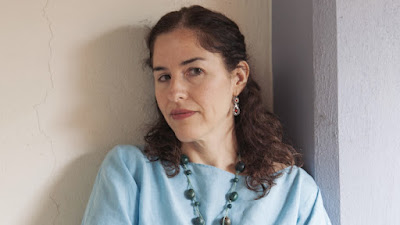 Nettel's novel interweaves the stories of various kinds of 'motherhood' throwing into question what counts as a 'mother'? Are you a mother if you baby dies? Are you a mother if you are not biologically related to a child? In the talk on Thursday, further questions arose in this regard: are you a mother if you use a surrogate? are you a mother if you are a surrogate? are you a mother if you give your baby up and don't know them as they grow up?
The novel aptly points out that while there is a word for a person who has lost their spouse (widow/widower) there is no word for a parent who has lost their child and that in language, some things have been not named, perhaps because they feel unnamable. Nettel pointed out that the first thing we do when a baby is born is name them, giving them presence and substance and acknowledging them as a being in the world. What happens then when we experience something without a name so intense and profound that changes us so that we become in some ways defined by that experience? Do we become unacknowledgeable?
Recognising the cost to women of raising children and the imbalanced impact on the lives of mothers compared to fathers, even the most present and caring ones, Nettel's novel proposes what is, on the one hand, a radical new form of 'mothering' but, on the other, a nod to past practices of raising children: that is, collective or communal motherhood. In this version of parenting, the nuclear family is not revered and is instead a negative siphoning off others from the family unit, where they could be helpful and reduce stress and strain from the mother, allowing her to care for herself better and us be a better parent. Through her characters, Nettel asks: what would it mean to open families to other 'mothers' or women to assist in child rearing in a manner that is not experienced as a threat to the family unit or the mother-child connection or perceived as a reflection of not good enough mothering? What if instead, allowing others (friends, family, neighbours) into your home to help you raise your child is powerful feminist gesture, one of freeing the mother to be both mother and her own person as a result of this bolster or alternative foundation?
Some other books on ambivalent motherhood I've read recently include: Nightbitch by Rachel Yoder and Chouette by Claire Oshetsky.
Posted by Jessica Schouela at 09:32