A most interesting Canadian novel from 1976 (newly reissued by Daunt Books in the UK) that at once has a definitive Canadian feel and situatedness—starting in Toronto, but taking place mostly on a remote island in Northern Ontario, an area cohabited by fishermen and Native peoples—yet reads like an old English novel and deals with British history. A lonely and alone woman (it seems without friends, a partner or close family), Lou, working at a Heritage Institute in the city, spends the summer at the estate of a Colonel Cary (and subsequent generations of Colonel Carys) on an otherwise uninhabited island (founded Cary Island). The Colonel emigrated to Canada around the early 19th century and having the estate finally agreed amongst lawyers after years of negotiation to determine if it was left to living relatives or the Institute, the verdict reads in favour of the latter. Lou's task is to systematically go through and catalogue the estate's books, notes, and objects to hopefully discover nuggets of not yet known history of the local area. In the end, all she finds are historical (and largely already documented) information on the old world, especially England.
On the estate lives a bear, and, she is told upon arrival, that throughout the centuries, there has always been a bear and is asked to feed and water it, as you would a dog. Lou develops a close relationship with the bear, at first, taking him on his chain to the river to bathe and swim with her. The bear in turn, gets cosy inside the house—he seems familiar with it's layout—and they spend evenings together by the fire. A foot caressing the bear's thick pelt quickly becomes charged with eroticism and this eros festers on the island in the absence of other humans, or perhaps, because of the absence of humans.
The novel is undoubtedly feminist in tone and plot: as Lou discovers dormant aspects of her sexuality and desire for affection, Engels is daring in her discussion of beastiality and doesn't shy away from Lou's own reflections on her taboo act and her feelings in the aftermath, which are perhaps unexpected to the reader.
I loved eccentric and original book and am eager to read more by Engel and plunge further into her audacious Canadian and feminist writing. I have to say, it is a shame the Daunt cover is so terrible, seeming to cheapen or reduce it to a popular juicy sexual tale. For me, the Daunt cover totally misses the spirit of the novel, which is actually very homely and even rustic, and oddly wholesome. I'll post other covers below, which I feel better capture the timbre of Bear. 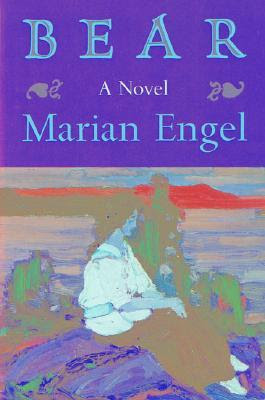 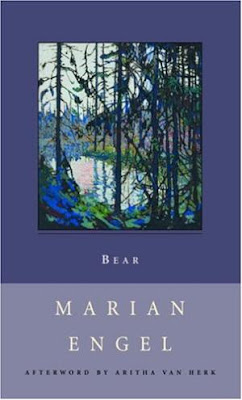 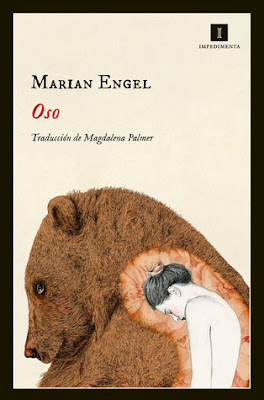 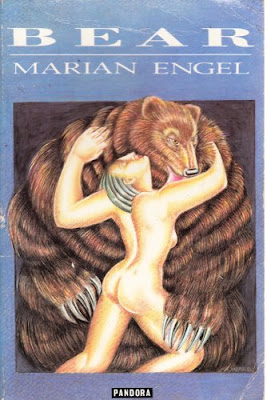 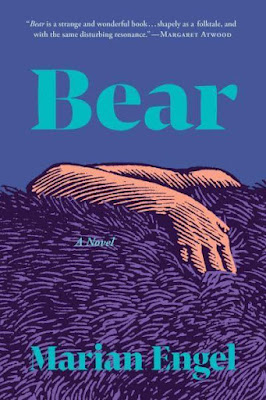 Posted by Jessica Schouela at 10:20