Getting ready to read Max Porter's new book, The Death of Francis Bacon, and knowing in advance it would have an experimental and fragmentary form and execution, I wanted to familiarise myself bit more with Bacon's life.

Last night, I thus watched the 1966 BBC documentary Francis Bacon: Fragments of a Portrait, where the painter is interviewed by art critic David Sylvester. Porter in fact references this film in his book, suggesting a kind of relationship between the two men predicated on esteem, indulgence, praise that may feed a sense of doubt or faltering and a performance that may ensure as a result: 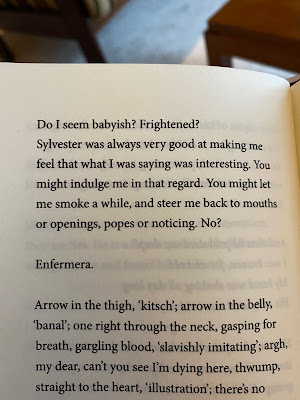 I deeply enjoyed the 45 minute documentary as much for what was overt as what was implied or what slipped in: the untold stories (of addiction, though alcohol and gambling were mentioned lightly and passingly as the benefits and drawbacks of painting on the drink) and queer undertones (part of the interview takes place on a bed, Bacon and Sylvester each reclined facing one another, not touching). 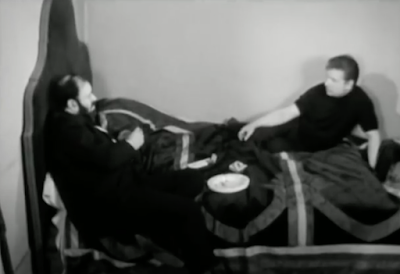 The artistic liberties, such as the montage of clips of mouths (open, screaming), mirrored the theme of fragmentation both in the close up framing of the mouth and in breaking the straightforward documentary style (and indeed invokes for me Porter's fragmentary prose). Bacon, explaining his obsession with mouths because of their wet and glittery features, traces the origin of this fascination to the staircase scene in Eisenstein's Battleship Potemkin. He claims that while he's been able to paint screams and often renders the open mouth in his painting, he's not been capable of painting smiles, which he is also interested in. 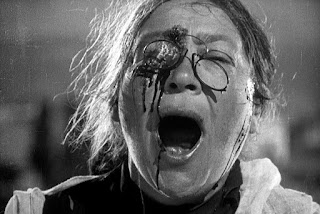 In addition to this cinematographic influence (in the film, there is also a photograph among his collected scraps of images of Falconetti from Carl Theodor Dreyer 1928 film "The Passion of Joan of Arc", a film that has gripped me for many years now), the documentary reveals that Bacon preferred to paint from photographs. 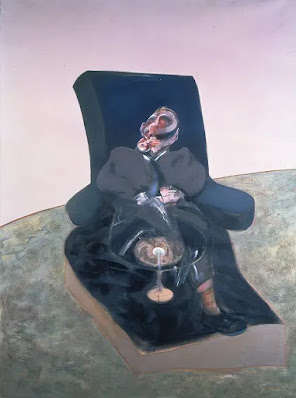 Bacon explains that this is a result of feeling inhibited by the presence of the sitter. His paintings undeniably suggest movement: Sylvester describes a quality of the sitter in Bacon's paintings as giving the impression of having been caught off guard by an unexpected intruder entering the room and the blur that ensues from moving one's head quickly. The blur in photographs is often the result of a mistake or spontaneity: the subject or the camera moving unintentionally and in/opportunely, capturing the motion/gesture of the subject the moment the shutter is triggered, distorting the image. 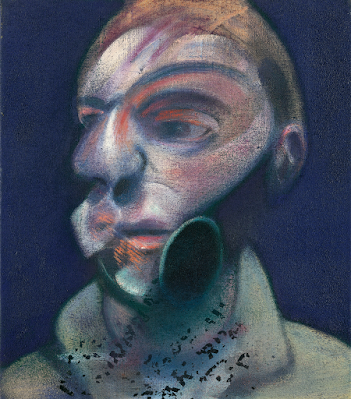 Knowing this, not surprisingly, amongst Bacon's collection of images are pictures from Muybridge's early experiments with photographing movement. The notion of the triptych also suggests viewing the subject from different angles. Bacon presents his subjects as if in front of three angled mirrors. This perspective(s), and the insertion of movement as somehow part of a pursuit to get closer to accessing truth or real life is reminiscent of earlier Cubist projects and formal interventions.

Porter reveals his project's aim, which is in no way straightforward or immediately accessible. Yet, it attempts to sift through the noise (art history) to reach a different kind of access (more direct?) or answer to, and/or phenomenological encounter with painting: 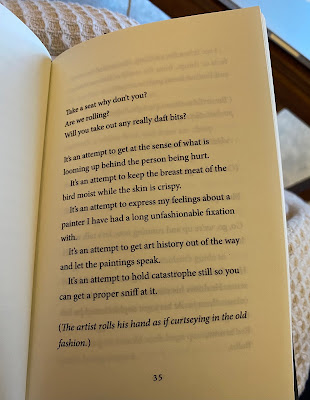 Posted by Jessica Schouela at 17:09

Email ThisBlogThis!Share to TwitterShare to FacebookShare to Pinterest
Labels: Book thoughts, On art