Last night I went to see the UK premiere of Anna Zamecka's film 'Komunia' released this year at the ICA in London. The film was indeed beautifully shot, and her subjects, a family going through a difficult time both financially and interpersonally were each in their own way, gorgeous, charming and evocative. In the Q&A, Zamecka mentioned having had a script in mind as well as having a story line she wished to communicate about the 'adult-child' or having to grow up too fast.

None of the subjects (she used the word characters) ever acknowledged the camera and the editing was continuous to such an extant that it was easy to forget that one was watching a 'documentary'.

Some questions that arose when I thought about the film further:

- to what extent are documentary filmmakers ethically accountable for a self-reflexive and critical stance of their own involvement in the scenes in which they seek to represent? Further, to what extent  do they have a responsibility to acknowledge their presence in a literal way, beyond the assumed intimacy between the filmmaker and his/her subjects?

- in this way, to what extent does the camera and the presence of the filmmaker alter the 'performance' of the subjects (characters?), and as a result, should this be addressed within the film?

- what gets included within documentary? What should be included?

- to what level of involvement should a filmmaker introduce his/her input in or manipulations of scenes? How does a documentary filmmaker 'direct' if he/she is truly making a documentary? Is this present mainly in the editing process? How involved should a director be? Is it more honest to allow scenes to unfold before the camera rather than to follow a script in the making of a documentary film? Is this 'honesty' necessary?

- to what extent is documentary filmmaking opportunistic in its very nature of representing real people in real scenarios and as a consequence of making a film, to have one's name as author attached to the depiction of the lives of others? To what extent do you need to be opportunistic to produce good documentary - when you discover an important story, you follow it?

- how might documentary filmmaking serve to help its subjects especially if they are represented as dealing with some sort of hardship or economic difficulties? 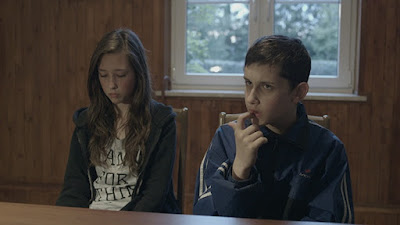 Posted by Jessica Schouela at 21:46