PICTURES OF THE GREAT WAR: FEELING THE HEAT, KNOWING THE CHILL

I wrote a review on York Art Gallery's exhibition called Truth and Memory, which they published on their blog: http://www.yorkmuseumstrust.org.uk/blog/pictures-of-the-great-war-jessica-schouela/

The heat emanating from the second room of York Art Gallery’s current exhibition, Truth and Memory: British Art of the First World War is nearly palpable; the closer I approach Anna Airy’s large-scale paintings, the more the factory blaze described by a surprising fluorescent orange makes its way to enshroud my almost reddening face.

Perhaps too quickly, I am reminded of the real chill in the gallery made actual by the controlled humidity levels designed to comfort me and to keep the works around me safe and preserved. It is curious then, that an exhibition on the Great War should make me feel at once hot, nearly fervent and then immediately frigid, but more than anything, secure, unharmed, ultimately protected.

In the same year she painted this work, Airy, who studied at the Slade, in 1918, constituted one of the first women to work for the Imperial War Museums and to receive commissions from the institution. Notably, on A Shell Forge, the Imperial War Museums relay that as a result of the intense heat in the factory, during a particular visit, Airy’s shoes had become so hot from the floor that they “burnt off her feet” (1).

Airy’s technical expression recounts the movement and vibrations of this particular yet familiar and widespread scene; such stirrings actively respond to the physical labour of the factory workers or to the waves and sparks caused by the heat, both instances rendering the atmosphere vibrant and kinetic.

Moreover, not only are her paintings reflective of the increasingly modernist style that favors descriptive planes (such as with Cézanne’s landscapes) to suggest three dimensional objects or perspectival space, but indeed to witness such affecting canvases at this impressive and monumental scale made by a woman artist is both a treat for the feminist art historian, but also a definitive acknowledgment of the various, and at times unconventional roles that women occupied during war time.

The unexpected fact of the production of these massive paintings having been produced by a woman artist at the beginning of the twentieth century instinctively brings to mind Linda Nochlin’s iconic essay, “Why Have There Been No Great Women Artists?”. Her wish in this paper is not to suggest we dig up women artists who had been neglected to be acknowledged, nor is it to attempt to locate a “quintessential feminine style”.

Instead, she proposes a revision of the custom to describe art as “personal expression of individual emotional experience” made by an intrinsic genius, and instead insists that we attend to the socio-political and historical contexts that would have either made it possible or impossible for women artists to be the authors of great art (2).

Airy is indeed an example of just this: it is commonly understood that it was as a result of the war and the consequent absence of husbands and sons made soldiers, that, for perhaps the first time in recent Western history, women were abruptly rooted out of their domestic havens (of labour still) and projected into the public work force.

While most of the works within Truth and Memory, like Airy’s paintings, describe the dynamism of war, be it in the factory or on the front line, included in the exhibition is also George Clausen’s Youth Morning of 1916. A kneeled over naked woman holds her weeping face before a wooden cross in a battlefield; behind her water has filled the craters of the sunken terrain.

She represents not only the artist’s mourning daughter after the loss of her fiancé, but also behaves as the emblem of a sorrowed and heart-broken nation, and of the intimacies of loss (3).

Other artists in the exhibition include: William Orpen, Jacob Epstein, Paul Nash, Percy Wyndham Lewis, CRW Nevinson, and Stanley Spencer. Truth and Memory will be on view at the York Art Gallery until September 4, 2016. 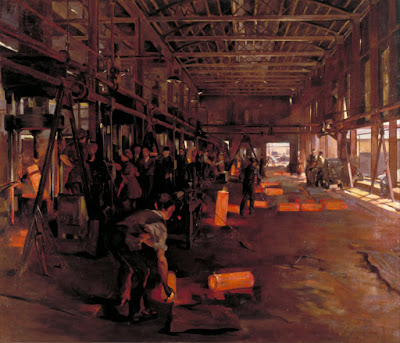 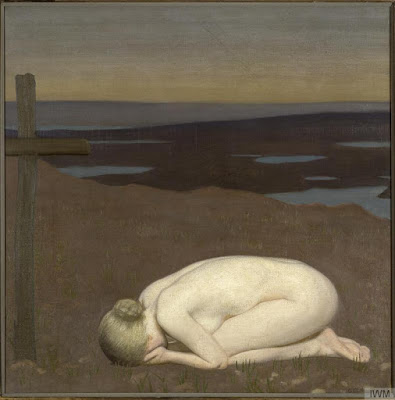 Posted by Jessica Schouela at 14:18